Speech Debelle – Blaze Up A Fire

During last weeks riots, Speech Debelle spoke out.  While virtually every other mainstream UK ‘rapper’ stayed silent, cowering away scared to lose endorsements, she spoke her mind.   She spoke couragously about the causes of the problems getting in to many arguments along the way.  For all they hyperbole floating around, Speech Debelle spread a great deal of knowledge, and she was very brave to do so.

In the mini-article accompanying this song she wrote;

“People have asked why they are destroying buildings and property from their own communities but they look at them as just buildings that do not belong to them, and never will. Only people who cannot envision a positive future will take part in the destruction of their own community and if we acknowledge that, then we to ask the question why somebody so young feels they have so little to look forward to?”

The riots also lead her to release a song from her forthcoming sophomore album, Blaze Up A Fire, early.  A song about political revolution written months before Mark Duggan was known to more than his close friends.  Speech clearly knows what she is talking about, its about time politicans listened. 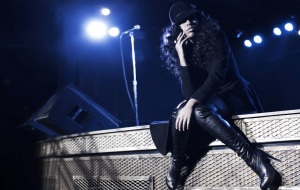 Right, from political activism to good old love songs about pain and heartbreak, sorry guys – keeping it happy today.  4am is a powerful record in which Melanie (and every other male in the world) wonders what on earth her ‘man’ is doing while she is left alone at 4am in the morning; “he’s probably somewhere with a dancer” she ponders… unlikely – he probably broke his leg while rushing to get back to you.

Her second album, The MF Life, is shaping up to be quite a record on the the strength of this, Gone and Never Coming Back and the track she did with Stephen Marley, No Cigarette Smoking.  Another top notch single from on shining light on the scene at the moment.

To my untrained indie ear, virtually every Drums song sounds the same.  A light sounding surfer rock; think modern day Beach Boys, just more steadfast and trendy.  Good news is it is a very addictive sound and  their new single fits in perfectly.

This song was clearly written about times gone by for The Drums, those times when they were broke.  Lead singer Jonathan Pierce laments during the refrain, “I want to buy you something, but I don’t have any money”.  Know the feeling mate.  However, after the success you’ve had, I’d love to see any of you pull that line your girlfriends!  I’d find the money to have front row seats to that explosion… either that or they signed one seriously f**ked record contract.

None the less, supurb record and sure fire underground indie hit!

Dubstep has gone global.  Then again you all knew that.  This is a Canadian take on the genre, and a fierce take it is.  So fierce it’s not even called Dubstep anymore… no in Canada this is tagged as “Thugstep”!!!!  These guys are bloomin’ tough.