I’m starting to think VV Brown and the British weather are inextricably linked.  Ever since she announced a few gigs this summer the weather has picked up immeasurably in London.  The last times I saw her play were both in 2009, the last semi-decent summer London has witnessed weather wise. 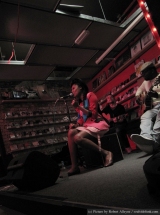 It’ll be very interesting to see what music Ms. Brown brings back with her to the UK.  There has been little to go on following her pretty raucous début  Crying Blood beyond the single she released last year, “Children” which was a bullish and playful piece of pop music with a heavy dose of youthful shouty chanting (see below).

The two shoes announced so far are as follows;

I have a sneaky feeling these shows will sell out pretty quick once she releases (if she releases) a new single or announces another album.

Tickets are available here (for Hoxton Square Bar) and here (for Madame JoJos).  Tickets for both shows are only £6 (+ fees) so pretty much a bargain in my eyes.  She is a very good live performer so seeing her playing small venues in London Town again should be a real treat.