6:40pm – It’s coming up to 7pm and we’re hustling back from Breckenridge. In the front Erica has stopped trying to convince her phone to play music and her boyfriend, who’s driving, plugs Pandora back in. To up the ante and make the 3.6 litres of Subaru engine move quicker we start a Bloc Party station. The gentle strumming of So Here We Are begins. This is not the Bloc Party we need right now. I call out the name of restaurants discovered on Yelp to try and find a pitstop for food. This is getting tight. We burst by the sign for Denver West, push back against our chairs a little through the acceleration as we round a sharper than expected turn on the freeway. We zing by a few trucks, The Strokes are playing now but no one is listening, the car feels as though aerodynamics are sucking it to the ground. We reach a consensus on passable food which will be quick enough to help us reach our goal. We cut sharply off the freeway at the next junction, make a quick stop to “refresh” before shooting off into the Denver night once again; we might just do this…

There are not many musicians or bands I’ve really obsessed over in life. My Top 20 lists usually turn into Top 40s with all the honourable mentions I have to add. I go through phases of caring a lot about a band for a year or so and then not even realising when they release new music six months later. My relationship with musicians is often fleeting like a fond summer fling disregarded swiftly after returning to your own bed, living room and kitchen. There are a few musicians/bands who I’ve never forgotten about, thrown away or broken up with, though.

My first was Eric Roberson. I discovered him via Jazzy Jeff’s The Magnificent album. His voice was like ruffled silk dipped in age-old Bourbon. The obsession was solidified when I saw him perform at the Jazz Cafe in Camden, London. His 2-hour set to this day remains of the best shows of my life. Ahead of his next show in London, I sat by my computer waiting for tickets to be released like a thirteen-year-old awaiting One Direction tickets. I bought numbers one and two and still have them to this day. 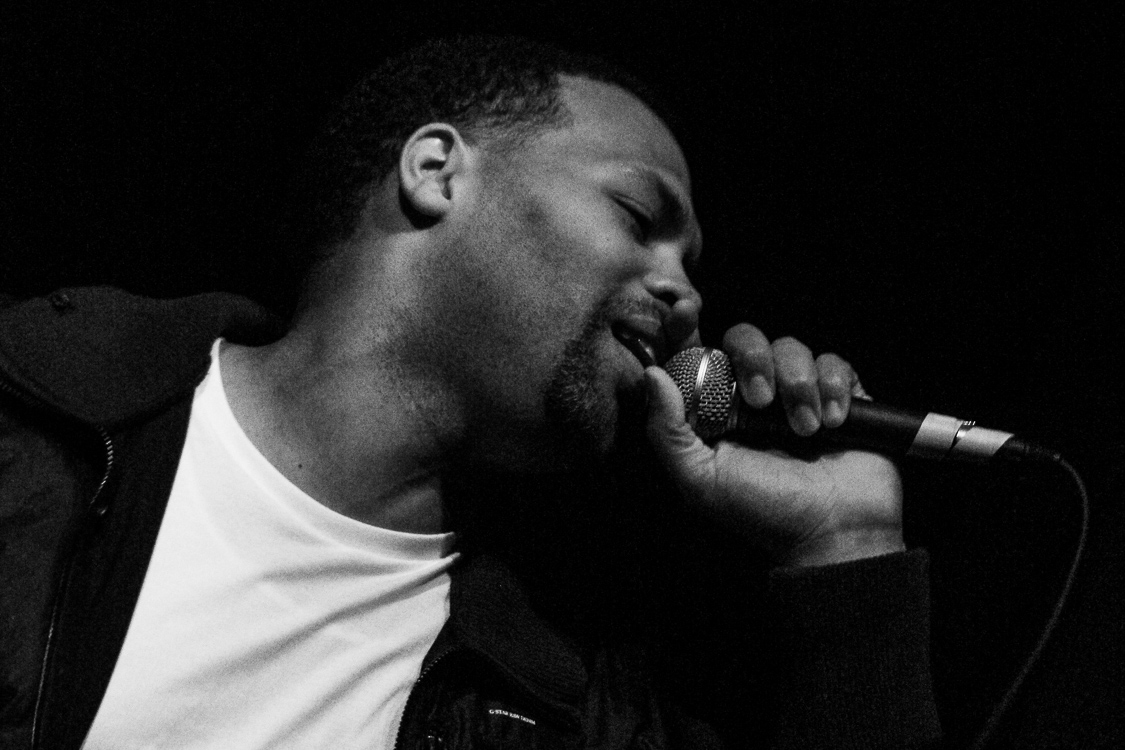 My next obsession was Nizlopi, who I discovered while in the dentist chair having a filling. JCB Song acted like a soothing painkiller underneath the noise and carnage of dental drilling. My friend Manj and I would travelled  the country to see them when their London shows sold out. Years later, the obsession was so deep that Luke Concannon sang at Manj’s wedding, my gift to him and his wife.

7:00pm – We’ve found the restaurant. As we pull into the lot we pass a sign which reads ‘Free Valet Parking’. We ignore it and park ourselves. They’ll take too long when it’s time to go and minutes will be important. Time is unforgiving. It doesn’t pause for you to catch up. It doesn’t wait around as you make decisions, stopping others’ lives. It just ticks, beeps, and silently moves on.

We walk into the restaurant discussing how much of a wait we can bear if we want to make it to Summit Music Hall on time; twenty minutes, thirty minutes, nothing at all. The restaurant has a rich, warm hue to it. Families share tables over what seems like a great expanse. My heart sinks a little as I see a small collection of people waiting by the entrance; they take all the space up on the ageing brown sofas. The woman in front writes her name on a list. This is not a good sign. My eyes immediately canvas the bar for free stools. I see two, we need three. Fuck. I’m a little confused as we’re taken immediately to a table. It feels like we’ve jumped a line. I don’t really care, things are looking up…

On a sunny autumn evening in 2009 I’m searching for a bar/artspace near Tottenham Court Road. A few days prior I won tickets to Ke$ha’s first show in London. When I finally find the venue, it’s packed. Balding men hold on to beers at the back, young interns excitedly rush around, laughing louder than usual to force out an aura of cool. I shuffle as far forward as I can to find a spot. I end up wedging myself in a place which is too tight to fit me and I have to tiptoe to see the stage. Some guy in a suit from her record label comes out to give an introduction. He compares her to Madonna. I think it’s a bit premature. Ke$ha delivers a short, fun, high octane set and I vow to see her perform live again.

Months go by and Ke$ha becomes a global superstar. Her music reaches my every sonic orifice by way of radio, TV, blogs, social media… I soon forget to search for her music and research shows until she plays Hammersmith Apollo in 2011. The gig was already sold out by the time I heard about it, so to overcome the disappointment of missing out, I searched the next day for pics and reviews of the concert. It was then I discovered Teddy Sinclair (then known as Natalia Kills).

At the time I had been listening to a lot of electro, synth-heavy pop music, some of which sounds gloriously dated now. One my main frustrations with the genre was that it was all so safe. It was oft times too colourful, it was too saccharine. And here was this woman dressed like a pop-punk misfit with darker lyrics. The songs weren’t just about being young and free, they were about being young, free, and spending money you didn’t have for a life you were not sure you wanted. At times it was satirical, at times is was heartbreaking, and it served as the perfect potion my ears needed. Without an album at the time, I searched for whatever I could find, videos shot on first generation smartphones, features, concert photos, interviews whatever I could find.

7:50pm – Dinner completed. 16oz Margaritas consumed. Only things left are to pick up the tickets, a swift freshen up and then find an uber. Kiiara’s Feels plays on the radio, so we pump up a little. Erica and I still disagree over which version is better, the remix or album version. We put on Gold next and find amusement each time she mentions the “basement.” This becomes the lyric of the night and over-enthusiastic juvenile dancing ensues with every mention of the word. We drop off the car, pick up the tickets, and call for our Lyft ride. It’s touch and go. This is my first gig in Denver and Cruel Youth are one of the two opening acts for Kiiara. We don’t know who is playing first and the tickets said show time at 7pm…

When The Perfectionist dropped in 2011 it was just what I needed. Launched on the back of a series of artfully irreverent mood films called Love, Kills, it was energetic, sinister and gloriously at odds with the pop-scene around her. My appreciation of the music changed upon reading interviews with her. The music wasn’t “dark,” it was the reflection of lived experience: toxic romantic relationships, being broke and the “riches to rags,” tale of her family life. When Trouble was released two years later the lead single is Controversy. Who would’ve known it’d be borderline prophetic…

8:30pm – We’ve made it! There is no line outside but we still have to work our way past the stragglers and smokers. When we get inside the stage is dark with concentrated areas of intense deep green light. The music sounds like Drake but the song is unfamiliar. Erica’s boyfriend asks the question on our mind. He smiles as he looks back, “apparently that’s Lil’ Aaron on-stage. Cruel Youth are on next!” We head to the bar, order some drinks, and I relax. The venue is packed. After the second round of drinks, I leave to two lovebirds for some QT while I skip around the expanse of the crowd to settle in for the show. Two solo albums, six years of waiting, I was finally about to tick Teddy Sinclair off the list…

It was a message from twitter which alerted me to the “controversy.” Natalia Kills and husband Willy Moon had berated X Factor New Zealand contestant Joe Irvine for being unoriginal comparing him to Norman Bates. On a show which is driven by outrageous opinions I thought this was all a bit of hooha to boost ratings. At the time I tweeted that they were probably both encouraged by to be the OTT villains every show like this needs. I thought that was it; lines were crossed, apologies were made.

Fast-Forward 10 days and the controversy is still on-going. The internet judge and jury continues to spew death threats, rape threats, and call her all kinds of expletives. It gets so bad she starts re-tweeting the messages she is receiving. She posts images of Instagram comments only to have them removed for violating community guidelines. It’s a fuckery. The mob accuse her of bullying only to do far worse to her in retaliation. It was the first time a celebrity I cared about has gone through something like this and each threat to her broke my heart, leaving shards of glass inside which scratched, pierced and punctured it each time I thought about music. These things are supposed to blow over, however, it felt like more were joining in, many of whom had no idea who she was or what she had done, they were like sadistic Lemmings following each other off a cliff into a sickening world of online abuse.

I cannot even imagine what it would have been like to experience, however, it appeared to offer a chance for reinvention. She legally changed her name to Teddy Sinclair (taking on a childhood nickname and her husband’s surname). Was able to focus on songwriting with hits for Rihanna, and Madonna released in and around this tumultuous period. Then, in 2016, she released arguably the best music of her career with Cruel Youth.

9:05pm – How I managed to get this close to the front after arriving so late is beguiling. Teddy Sinclair walks on stage and a chill shoots up my spine. Moving to America has had a few of these moments; seeing the Knicks play in Madison Garden, standing on the top of Nob Hill watching July 4th fireworks, moments which will live long in the memory. And now, after six years of failed attempts and missed shows, I’d travelled 1,526km from San Francisco to Denver to hang out with friends and tick Teddy Sinclair off the “must see live” list. She powers through +30mg and by the time they perform Mr Watson I am singing at the top of my lungs. Her voice is wonderfully imperfect. It sounds even grittier live, the distortion is sumptuous. She doesn’t say much between songs, I don’t care. She takes the time to let us know hatefuck is her favourite track on the EP, and you can see everyone bubbling to it. The set is over too soon, and I am left wanting more. The chorus of Diamond Days, her closing track, lingers long after Cruel Youth have left the stage and started packing up. I mentally tick Cruel Youth off the list only to add them back on instantly. 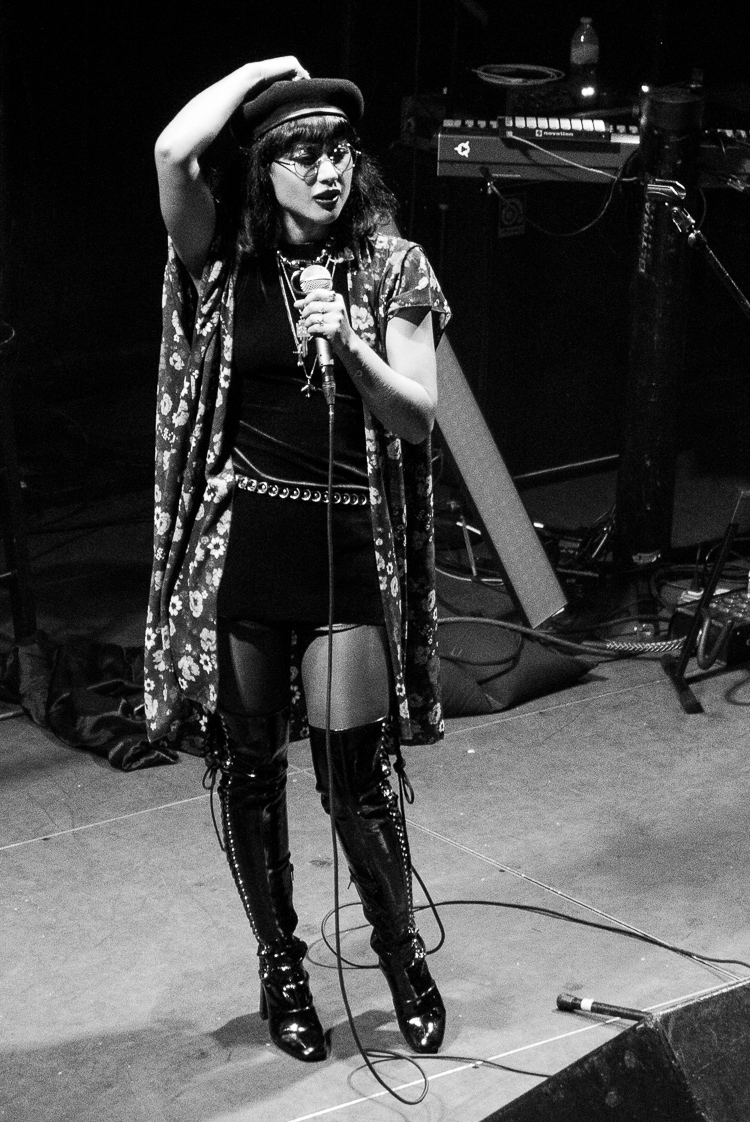 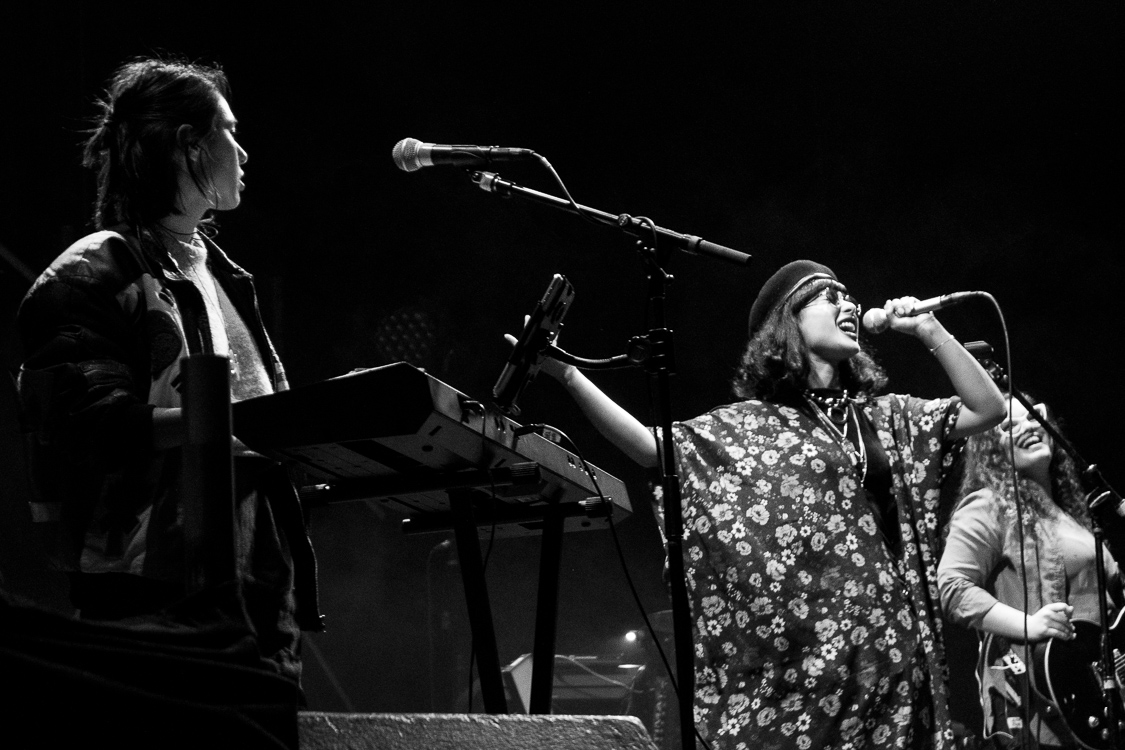 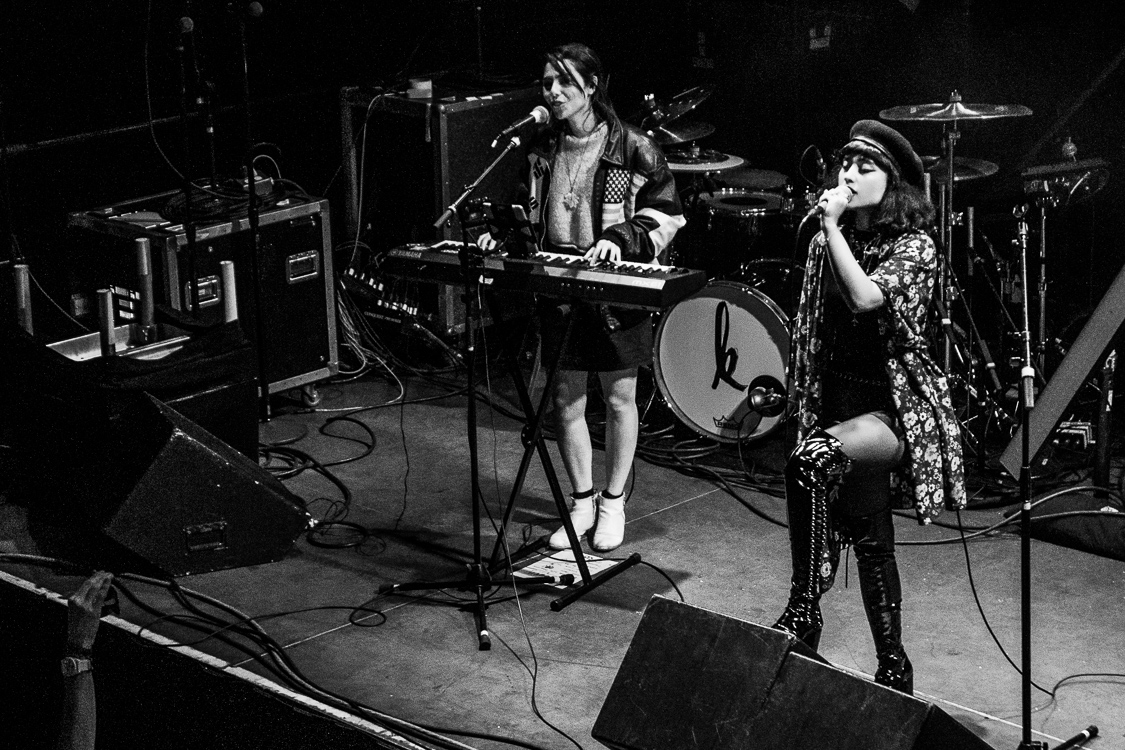 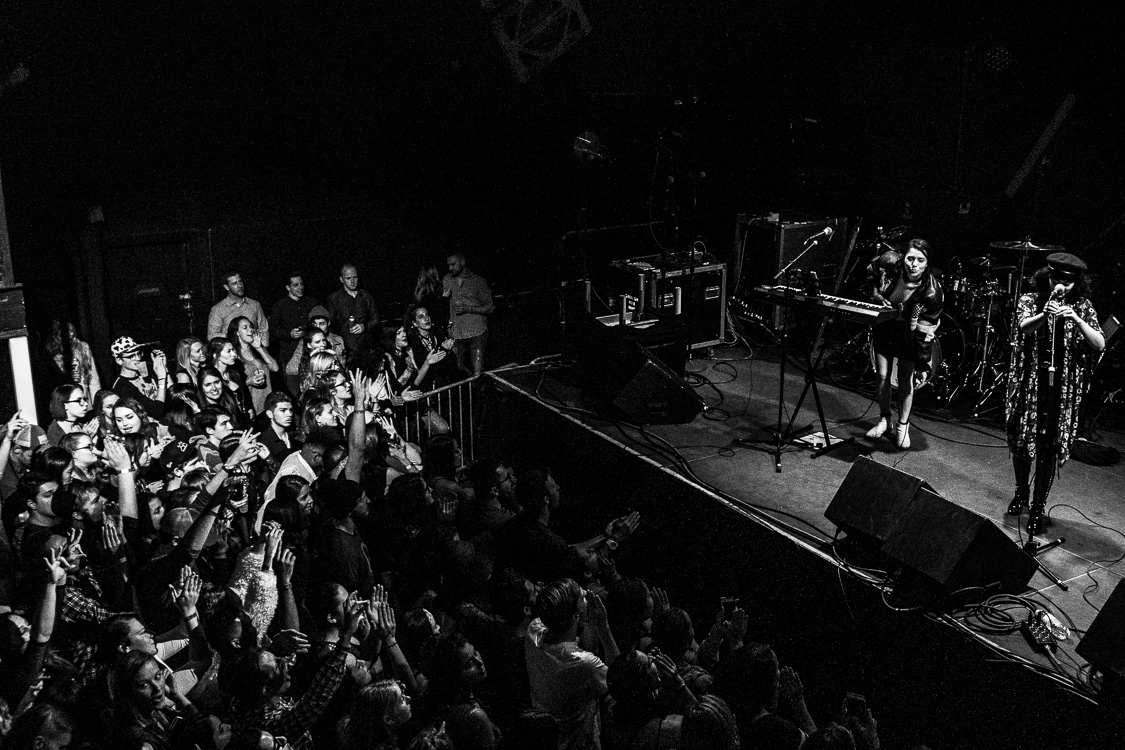